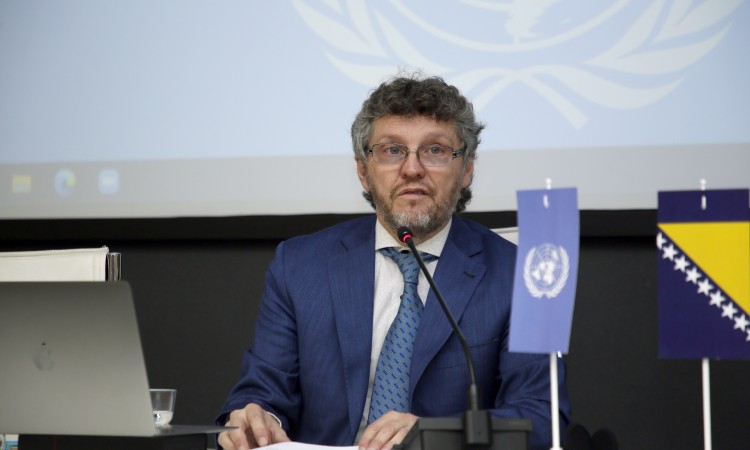 SARAJEVO, December 13 (FENA) – A UN expert today urged Bosnia and Herzegovina to prioritize the protection of human rights over divisive political agendas in transitional justice efforts to address the serious violations committed during the 1992-1995 armed conflict.

At the end of an eight-day official visit to Bosnia and Herzegovina, the Special Rapporteur on the promotion of truth, justice, reparation and guarantees of non-recurrence, Fabián Salvioli, raised concerns about increased hate speech, glorification of war crimes and denial of genocide and crimes against humanity in the country

Salvioli urged the Government to advance a comprehensive transitional justice agenda and to curb polarization and the rhetoric of hate through a human rights-based approach.

The UN expert welcomed the “efforts made by Bosnia and Herzegovina, with support from the international community, to rebuild its institutions and address certain aspects of the legacy of the conflict, in particular the prosecution of war crimes and the search for missing persons, albeit regretting a distinct decrease in the pace of such efforts in the last decade”.

Human rights obligations of the State of Bosnia and Herzegovina are non-negotiable, as they are set in the treaties to which the country is a party, he said.

“I note with concern the insufficient progress made in the fulfillment of the country’s human rights obligations regarding the full and effective reparation to all victims of the conflict without discrimination; the memorialization of all human rights violations and the harm suffered by all victims of the conflict; the collection, preservation and transmission of records of past violations to present and future generations; the realization of rights of returnees; the adoption of effective guarantees of non-recurrence particularly in the fields of education, culture, protection of human rights and vetting of security, judicial and other institutions; and the ineffective action in the face of hate speech, the denial of genocide, crimes against humanity and war crimes, and the glorification of war criminals,” he said.

The expert called on the Government of Bosnia and Herzegovina to renew its efforts to advance a comprehensive transitional justice agenda with a view to achieving effective reconciliation, sustaining peace and preventing the recurrence of past atrocities. “Such an agenda should be anchored in the country’s existing international obligations and place the rights of all victims at the center of any legislative and policy decisions,” he said.

“I also wish to call on the international community to resolutely support Bosnia and Herzegovina in this vital endeavor.”.

The Special Rapporteur will submit a full report on his visit to the Human Rights Council in 2022.