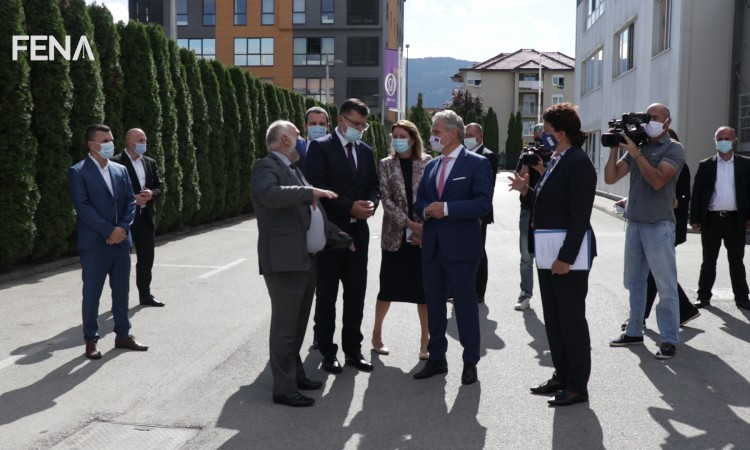 SARAJEVO, September 24 (FENA) – Head of the EU Delegation and EU Special Representative in BiH, Ambassador Johann Sattler, commented today the adoption of the Revised State Strategy for War Crimes and said that its adoption represents an important step towards bringing the country closer to the European Union.

“This morning we had a meeting with Chairman Tegeltija and other ministers, at which some final interventions related to the strategy were discussed, which will ultimately ensure its adoption. I can confirm that in the past three months I have been personally engaged in ensuring the adoption of the Strategy for Work on War Crimes Cases because the European Union, above all, allocates significant funds for processing of war crimes cases, and this strategy is also one of the 14 key priorities from the Opinion of the European Commission,” stated Ambassador Sattler.

He pointed out that its adoption represents an important step towards the country’s rapprochement with the European Union.

“We succeeded in that with joint efforts. In the whole process, the strategy document was even improved thanks to various proposals coming from ministers and other actors,” said Ambassador Sattler.

He noted that the ultimate goal is to complete the most complex cases by 2023 and expressed hope that this will now be possible.

Asked whether there was pressure to adopt the strategy, BiH Council of Ministers Chairman Zoran Tegeltija said that if the pressure meant talks, “there were talks”.

“This document was adopted almost two years ago by all those who worked on its drafting, and as often happens in BiH, after that there are some demands for some changes. Another annex to the strategy itself was adopted which in my opinion is not that significant nor it has changed in the essence of the strategy itself,” stated Tegeltija.

According to him, the strategy is very important for BiH so that in the process of prosecuting those who committed war crimes, they would be sanctioned, and those who seek justice would achieve that justice.

Chairman Tegeltija is sure that this strategy will help in that.