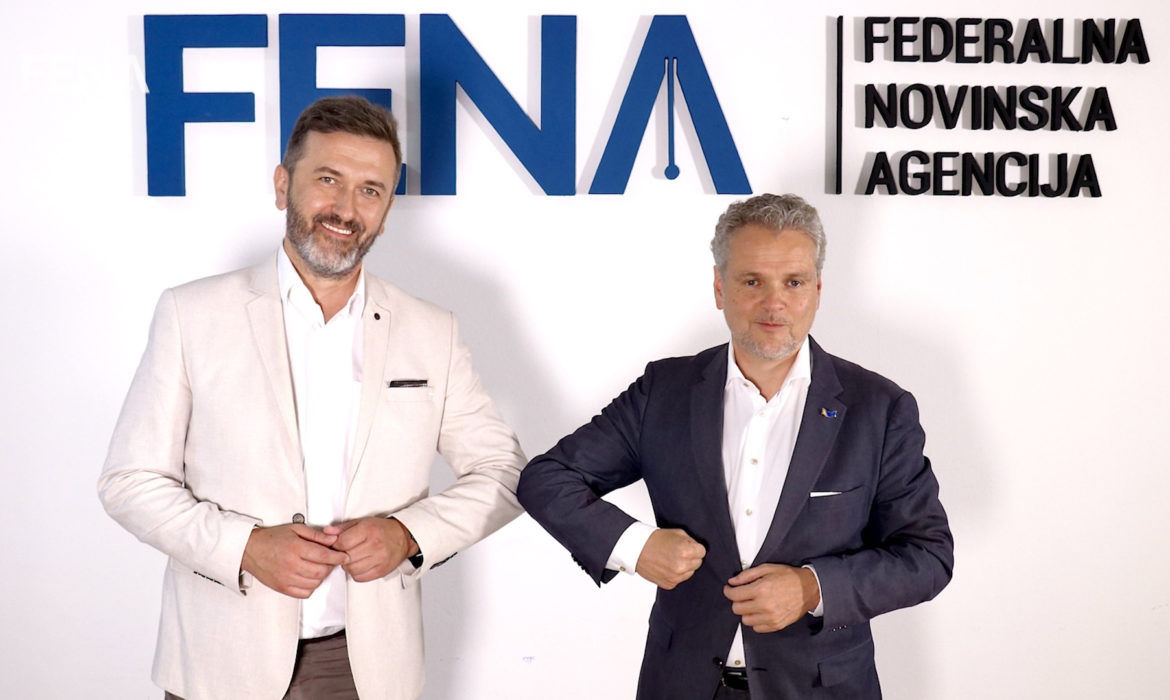 SARAJEVO, July 4 (FENA) – The Head of the European Union Delegation to Bosnia and Herzegovina and the EU Special Representative to BiH, Ambassador Johann Sattler, visited the Federal News Agency (FENA) today, where he talked with the agency’s director general Elmir Huremović about the importance of media in a democratic society and the role FENA has to play.

Ambassador Sattler expressed satisfaction after visiting FENA for the first time, an agency he says he has heard a lot about, especially emphasizing that independent media are the linchpin of every democratic society.

“They are needed in peacetime, but they are especially needed in times of crisis. We have seen this is the case in the last three, four months. It’s important to have good, reliable, fair media when it comes to the Covid-19 pandemic,” Sattler added.

He explained that the emphasis is on the quality and accuracy of the information and says that he is very glad that this was the case in Bosnia and Herzegovina, and FENA, he emphasizes, played an important role in that.

“FENA reported on everything that was happening in the country, on various hotspots of the coronavirus, it had live streaming of the crisis staff every day. I think that shows the quality of the media. And I support you to continue working like that,” he pointed out.

He also said that disseminating information on what it means to become part of the European Union is crucial, because it is necessary for citizens to support joining the European Union, as it is not something that only politicians and elites need to understand, but that the support of the citizens is crucial.

“Now it is turning into a movement in BiH. It is very important that the media, including FENA, report on this. I just saw the statistics that you have more than a thousand news stories about EU integration in the last year and a half. I think it’s commendable. There will probably be an increase in this number due to an increase in legislative issues that will be discussed in the coming period,” Sattler concluded.

As Director Huremović pointed out, FENA is dedicated to the European path of Bosnia and Herzegovina as well as to all the activities undertaken in this field.

“We are convinced that the role of the media in this process is very important. We are glad that Ambassador Sattler shares these views and recognizes FENA as a significant ally on this joint path,” said Huremović.

He reminded that so far, FENA has been regularly following up with the activities of the Delegation of the European Union in BiH, believing that an objective presentation of what BiH’s membership in the EU brings is actually the best incentive to meet the conditions that are put forward in front of BiH on this path.

“We hope, and we discussed this at the meeting, that there are numerous opportunities for joint action of the EU Delegation and FENA, because it is obvious that our goals are the same, and those are a modern and democratic state of Bosnia and Herzegovina within the European Union,” concluded the director general of FENA Elmir Huremović.