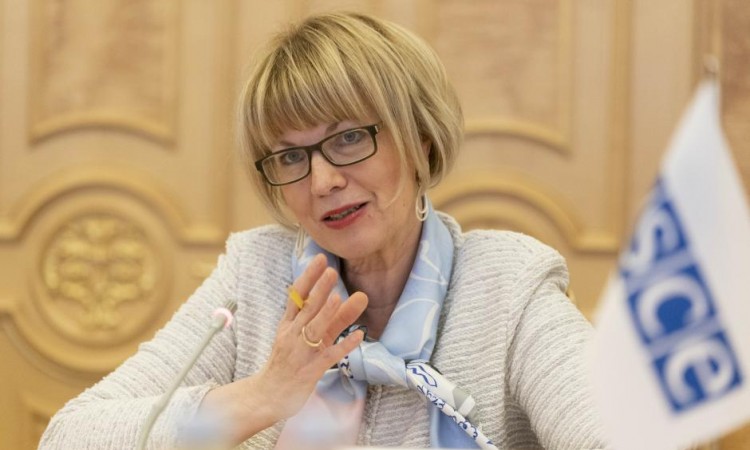 SARAJEVO, November 21 (FENA) – OSCE Secretary General Helga Maria Schmid will pay a visit to Bosnia and Herzegovina on Monday (November 22nd) to meet with a number of BiH officials, at a very difficult time for BiH marked by divisive rhetoric and political tensions.

In an interview with FENA, Schmid says she is looking forward to visiting Bosnia and Herzegovina, which is a real cultural mosaic, extremely vivid, and which has made commendable and hard-earned progress, which cannot be taken for granted.

“I know that I am coming to visit in a very complex period, which, unfortunately, is marked by increased rhetoric of divisions and political tensions. Therefore, my main message will be: the authorities must initiate a dialogue in order to resolve disagreements regarding governance,” she stressed.

The OSCE is wholeheartedly committed to supporting a secure, united and progressive Bosnia and Herzegovina. They have been active in BiH for 25 years, where the OSCE Mission plays a key role, working with partners at all levels of government across the country.

“This is the message I will convey at my meetings with members of the Presidency of Bosnia and Herzegovina, the Minister of Foreign Affairs and members of the Collegium of both houses of the Parliamentary Assembly of BiH. I will also talk to representatives of civil society and international partners,” she added.

She intends to encourage further work on electoral reform, based on the recommendations of the OSCE Office for Democratic Institutions and Human Rights (ODIHR), and will discuss the quality of education, where it is important to eliminate discrimination and segregation.

Another topic is arms control. The OSCE Mission and the Minister of Security have agreed on a new project to address the risks associated with the illegal possession, misuse and trafficking of small arms and light weapons and their ammunition.

She is aware of the fact that the citizens of Bosnia and Herzegovina are currently facing major challenges, be it the economy, employment, migration, education, corruption or health, and these are real, everyday problems, common to all citizens, which require urgent attention.

She notes that the OSCE is ready to help leaders focus on building and strengthening reconciliation and engaging in reforms that will strengthen BiH as a stable and prosperous country, and expressed hope that these opportunities would be seized.

“There are many positive examples of leadership, especially at the municipal level and throughout civil society, which deserve to be recognized and replicated across the country,” she stressed.

She expressed satisfaction that the governments in the region recognize this and remain committed to preserving and strengthening regional cooperation, and now more than ever, political leaders in the region are invited to present a positive vision of cooperation that can enable progress and overcome divisions from the past.

“One particular way in which the OSCE can help to improve this is to share the experiences of young people at the regional level. I will meet with young people and civil society representatives while I am in BiH and I look forward to hearing more about their work on key issues such as gender equality, as well as their visions for the future,” the OSCE Secretary General, Helga Maria Schmid, concluded in an interview with FENA.