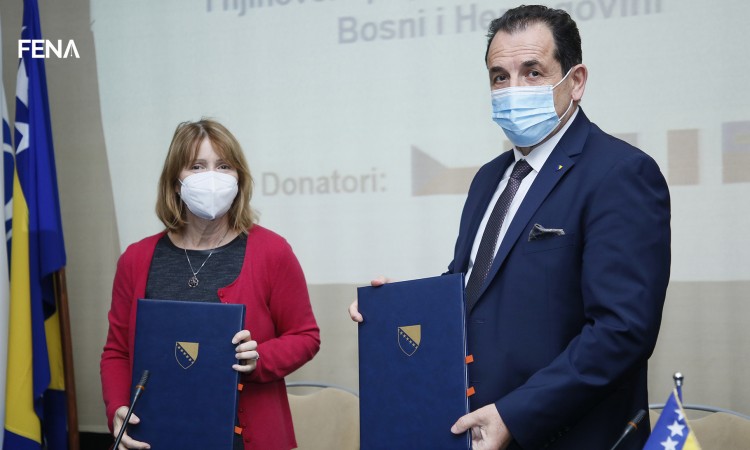 SARAJEVO, November 12 (FENA) – Minister of Security of Bosnia and Herzegovina Selmo Cikotić and Head of the OSCE Mission to BiH Kathleen Kavalec signed today the Protocol on the Implementation of the Project for control of Small Arms and Light Weapons (SALW) worth EUR 3.5 million.

It is a project funded by five OSCE participating States and will work to increase the capacity of police units with service dogs to detect firearms and explosives and improve police security depots.

As pointed out, the implementation of the project will last for three years and, among other things, will be aimed at harmonizing the legislative and regulatory framework for the deactivation of SALW and equipping at least two deactivation centers.

Ambassador Kavalec pointed out that effective arms control and confidence-building are prerequisites for security, stability and peace, and the BiH Ministry of Security and the OSCE Mission to BiH share a vision of BiH as a key factor contributing to regional security.

“The project will work on reducing security risks from illegal possession, misuse and trade of small arms and light weapons and ammunition in BiH, and its implementation is possible thanks to the contributions of the Czech Republic, France, Germany, Liechtenstein and the United States,” she added.

One of the goals of the project is to get accurate data on the number of such weapons in BiH, said Minister Cikotić, assessing that the issue of small arms and light weapons, along with migration, is the biggest security challenge in BiH.

“By signing today’s protocol, Bosnia and Herzegovina continues to carry out activities in the field of control of small arms and light weapons and continuously works on monitoring the latest standards and regulations of the European Union in this area,” says Cikotić.

Bosnia and Herzegovina is one of the few countries in the region that has adopted the document “Strategy for the Control of Small Arms and Light Weapons” and the accompanying action plan, and the Coordination Board that coordinates, directs and monitors activities to implement the strategy.

The protocol, signed today, is based on the Agreement between the Council of Ministers of BiH and the Organization for Security and Cooperation in Europe (OSCE) in the field of security and defense, and is aimed at providing support to all police authorities in Bosnia and Herzegovina.