Spahić: Corruption in healthcare is very difficult to prove 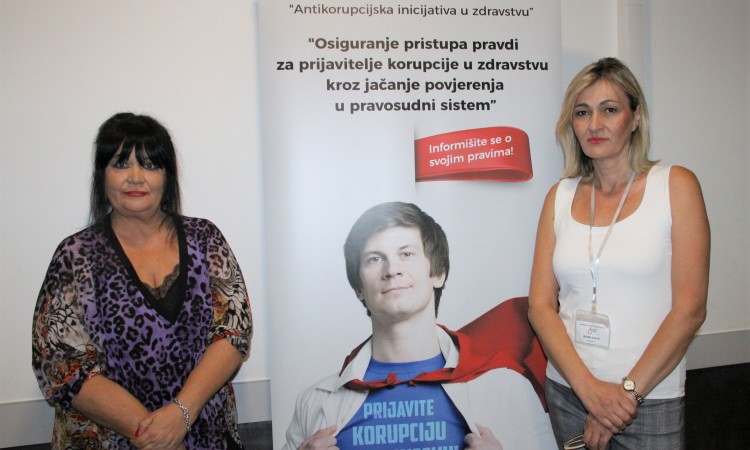 ZENICA, September 10 (FENA) – As part of the project “Ensuring Access to Justice for Reporters of Corruption in Health Care through Strengthening Confidence in the Judicial System”, a workshop “Implementation of the Law on Protection of Persons Reporting Corruption in Health Care of Bosnia and Herzegovina” was held in Zenica, supported by the High Judicial and Prosecutorial Council of BiH (HJPC) and the Government of Switzerland.

“We have already held several workshops in BiH. We are trying to determine and define what corruption in health care is. We have seen that citizens and patients do not even know what corruption is; many insist on giving a gift themselves – that is part of our tradition. Then we try to explain to them that in criminal law it is a crime, for which they can be sentenced to three to five years in prison. So, we are trying to explain to patients and citizens that they already pay for health insurance,” points out Merima Spahić from the Association for the Development of Society “Kap”, which is a partner in the project led by the Association of Citizens “Stop Mobbing” from Trebinje.

Patients, she underlines, are “shocked by the information” that they have already paid for services by paying contributions from salaries, as if they were also perpetrators of a crime. By the fact that citizens subsequently pay for health services, which is called corruption and bribery, Spahić notes, “they also endanger those citizens who do not have those funds.”

“Because, if every health worker gets used to receiving money for any diagnostic treatment or operation, then he will endanger the one who really doesn’t have those funds and that’s not right. That is why we want to raise awareness about that,” warns Spahić, who adds that, in addition to raising awareness about the harmfulness of corruption, the goal of such workshops is to form a network of whistleblowers.

He announces that they plan to include over 100 associations in that network, as well as representatives of the government sector, who are interested in forming a “serious network that will deal with these problems.”

“In all workshops, we talk a lot about the articles of the Law on Patients’ Rights in the Federation of BiH. We had a perfect law, which was adopted in 2010, but the problem is that it is completely unknown to the public and that it is not being implemented. On the other hand, corruption in health care takes place in a terribly subtle and very perfidious way. First, it happens behind closed doors and in the “four walls”, and, secondly, it is very difficult to prove. We established this at previous workshops with representatives of prosecutor’s offices, so we are trying to educate citizens on how to recognize corruption and how to report it,” says Spahić.

When there are enough reports, she underlines, something will surely happen. On the one hand, she notes, according to Transparency International (TI), the Corruption Perceptions Index (CPI) is the highest for health and justice, and on the other hand, we have “zero” reports of corruption in health care. Patients, she believes, are afraid to report corruption.