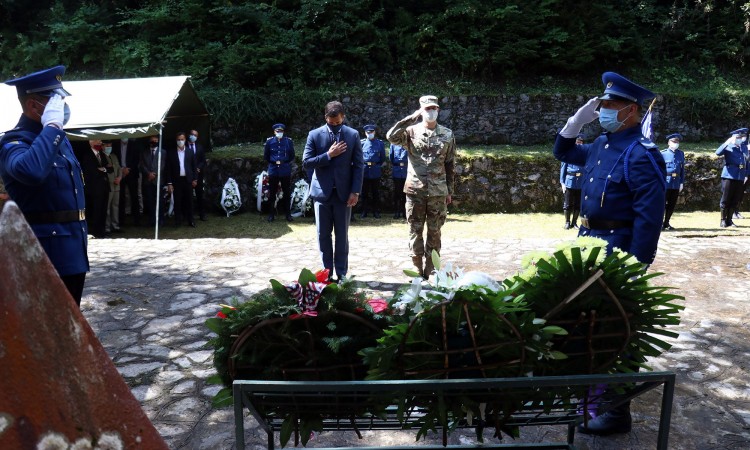 SARAJEVO, August 19 (FENA) – The Ministry of Defense of BiH marked the 25th anniversary of the deaths of US diplomats Joseph Kruzel, Robert Frasure, Samuel Nelson Drew and French soldier Stephane Raoult who were killed in a tragic accident on August 19, 1995, on Mt. Igman.

The highest representatives of the US Embassy in BiH, the Embassy of the Republic of France in BiH, the OSCE Mission to BiH, the Ministry of Defense and the Joint Staff of the BiH Armed Forces attended the commemoration.

US Ambassador to BiH Eric Nelson stated that Kruzel, Frasure, Drew, US diplomats from Richard Holbrooke’s office, the Special Envoy of then US President Bill Clinton and French soldier Stephan Raoult, tragically lost their lives on August 19, 1995, on the road on Mt Igman, returning to Sarajevo after being in a peacekeeping mission, which contributed to the later signing of the Dayton Peace Agreement.

“It has been 25 years since these brave people lost their lives on this dangerous mountain road, looking for a path of peace for BiH. Their courage is an example to all of us. They knew their job was not easy, but they believed it was worth fighting for. Their efforts only four months later will result in the signing of a peace agreement in Dayton. What we are doing here today is a continuation of what they started. They continue to inspire us to help make BiH a fairer state in which the law is equally applicable to all and to successfully complete its path towards Euro-Atlantic integration,” Nelson said.

BiH Defense Minister Sifet Podžić reminded that these people lost their lives trying to stop the war and help BiH.

“We have gathered to pay tribute to their sacrifice and heroism. Our presence shows that the memory of these brave people lives on. The place of their death obliges us to eternal remembrance and gratitude. In this way, we pay tribute to all the good people who worked in the 1990s to create peace, conditions for coexistence, restore trust and develop the democratic capacities of BiH. They are proof that there are people who experience the suffering and pain of another human being as their own and who serve higher goals such as peace and well-being. Their tragic death has become a symbol of friendship and help of the American and French people of BiH, and we are immensely grateful for that,” Podžić pointed out.

Head of the OSCE Mission to Bosnia and Herzegovina, Kathleen Kavalec, said that Kruzel, Frasure and Drew were on the rise in US diplomacy at the time, which is why they were carefully selected to take part in peace talks.

“Frasure was a skilled negotiator, known for his diplomatic work, Kruzel was recognized for his sophisticated strategic thinking, while Drew was adorned with valuable diplomatic skills. Their lives were cut short in an effort to end the war and prevent genocide. Today we remember them and they are our inspiration because of our commitment to give a better life to the people in this country,” said Kavalec.