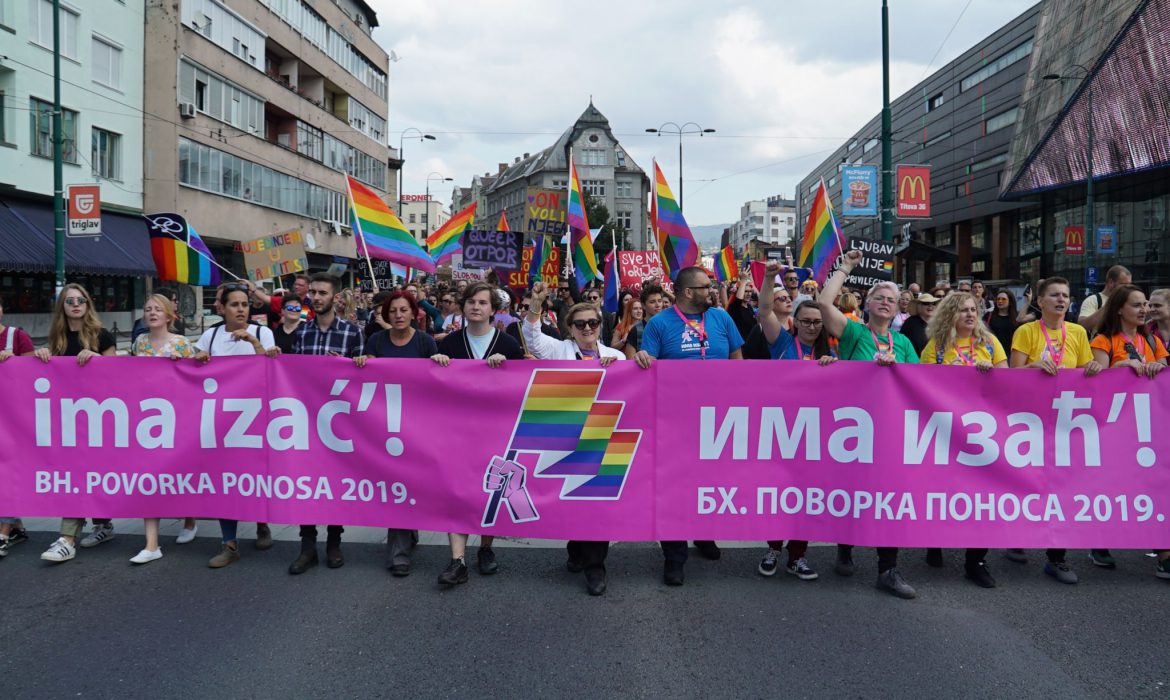 SARAJEVO, September 8 (FENA) – The first-ever Pride March of the LGBTIQ community in Bosnia and Herzegovina was held in Sarajevo today under the slogan “Ima izać'” (Come Out!)

This first and historic Pride March was held without any incidents as the participants walked from the starting point in the heart of the city, the Eternal Flame Memorial, to the Square of Bosnia and Herzegovina in Marijindvor, finishing the march in front of the State Parliament which houses several of the most important state institutions.

On behalf of the organizing committee of the event, the participants were addressed by Branko Ćulibrk and Lejla Huremović, while musician Damir Imamović performed at the closing of the event.

The organizers held the speeches in which they stressed that the members of the LBGTIQ community, as people with different sexual orientation and gender identity, are discriminated against in society, and Ćulibrk and Huremović urged for the guaranteed freedom of expression, the need for vulnerable groups to get out of isolation and ‘invisibility’ – at their workplace, in schools, universities, and with their own families, to have the right to freedom of expression and assembly.

They emphasized that advocacy of full respect for human rights and identities of lesbian, gay, bisexual, trans, intersex and queer (LGBTIQ) persons is oriented towards eliminating prejudices and stereotypes and aims towards institutional and systemic protection of the rights of all these persons.

They also assessed that there is no overt institutional support for respect for the human rights of LGBTIQ persons, therefore the society incites homophobia and allows violence against them.

At the same time, they argued that because of their sexual orientation, they have been stigmatized and exposed to violence, and reminded that Bosnia and Herzegovina still has not adopted any legislation regulating same-sex partnership.

The convoy was accompanied by a large number of media teams and police officers. On the streets in the center of the capital of Bosnia and Herzegovina, there was the deployment of a strong police force in charge of the security aspect of the event, including members of the anti-sniper unit. Throughout the envisaged route, there were physical barriers placed as well, thus preventing the access and any kind of physical contact between observers of the March and the participants along the route and from the side streets. The traffic on the route of the Pride March was also halted for the duration of the event.

A counter-rally was also held this morning from 10 to 11.30 hrs., by the citizens opposing the holding of the Pride March of the LGBTIQ community in the park near Alipašina Street. The event was organized by the ‘Iskorak’ Initiative, whose representatives “called for the traditional values ​​of the family as the basic social cell and a community of men, women and their children.”

They said that, “by holding the Pride event by the LGBTIQ population, Sarajevo has been humiliated as never before and that all of is being imposed by ‘people from the West’, endangering all the positive religious norms.”

The Sarajevo Pride March participants called for equal rights for all the people and individuals that are guaranteed by legal norms, as well as for the need for members of the LGBTIQ community to come out of the shackles of social intolerance, isolation and invisibility, verbal and sometimes physical violence, which they have continuously been exposed because of their sexual orientation.

The first BiH Pride March has been supported by the EU Delegation to BiH, and a rainbow flag has been raised on the building of the United States Embassy in Sarajevo on the eve of the event, symbolizing the rights of the LGBT community.

Today’s Pride March was also joined by the US Ambassador to BiH Eric Nelson, British Ambassador Matthew Field, some local representatives on the political scene, members of the academia, and the international community, and other members of society, among others.