The inaugural session of the Commission for Cooperation with NATO 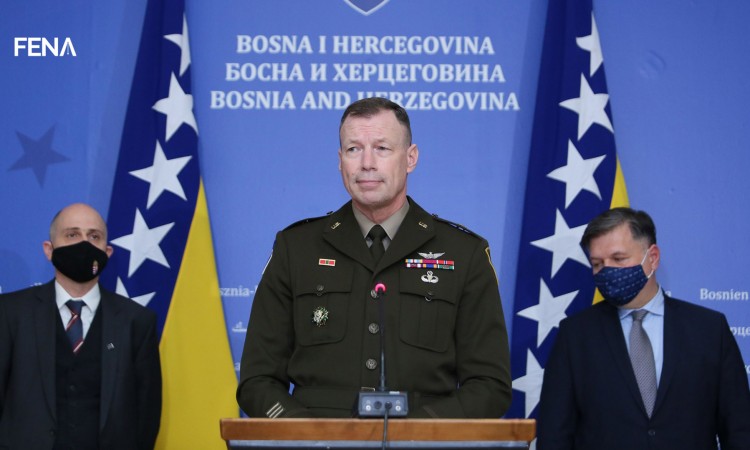 SARAJEVO, March 17 (FENA) – The inaugural session of the Commission for Cooperation with NATO of Bosnia and Herzegovina was held today in Sarajevo. The Commission adopted the Rules of Procedure and the framework plan for drafting the BiH Reform Program for 2021.

Deputy Minister of Foreign Affairs of BiH and Chairman of the Commission for Cooperation with NATO Josip Brkić stated that the mentioned framework plan envisages that the Commission will consider the basic document for cooperation with NATO in mid-April, that is, a draft reform program for the current year, after which it would be forwarded to the BiH Council of Ministers.

Commander of the NATO Headquarters in Sarajevo, Brigadier General Eric Folkestad, welcomed the beginning of the work of the Commission for Cooperation with NATO emphasizing that this is a group of people who will decide on areas of cooperation with NATO.

He recalled NATO’s position that its doors remain open to Bosnia and Herzegovina, stressing the importance of cooperation in meeting a common response to security challenges and risks.

“No country alone can confront today’s security challenges, whether it is responding to a pandemic, natural disasters, organized crime, illegal migration, or any security challenge we all face today. There is no doubt that we are stronger together,” said General Folkestad.

Ambassador of Hungary to Bosnia and Herzegovina, Krisztián Pósa, who, on behalf of the Embassy in charge of NATO contact in BiH, emphasized his readiness to provide full support to BiH.

He added that the dynamics and scope of cooperation with NATO depend on BiH, expressing the expectation that everything will take place following the appropriate dynamics.

Ambassador Pósa considers it very important that with the technical support of the partners in BiH, the NATO headquarters in Brussels gets the vision of the situation in BiH, to have a more complete insight into the situation and understand the reality in BiH.

Responding to a journalist’s inquiry regarding transparency of the BiH Reform Program, Commission Chairman Brkić said that the work of the Commission would be based on transparency, and that the competent institutions would be involved in drafting the document, and that the process would be open to the academic community, i.e. the professional public.

Commenting on a press inquiry regarding the dynamics of reforms in BiH, General Folkestad, given his mandate, focused on defense reform, emphasizing key segments concerning the BiH Armed Forces, their functionality according to NATO standards and achieving full interoperability, as well as participation in peacekeeping operations and other activities under the mission.

Asked to what extent Brussels is satisfied with the implementation of activities in the context of last year’s BiH Reform Program, Ambassador Posa expressed satisfaction with the occasion, saying that NATO Headquarters has received positive steps in this regard so far.