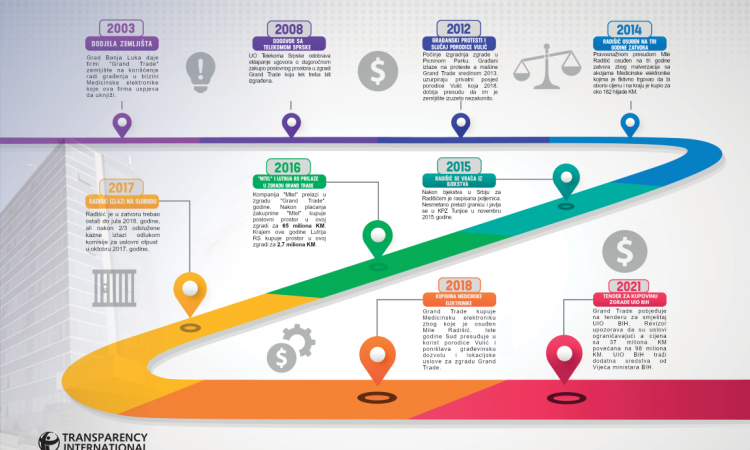 SARAJEVO, September 10 (FENA) – Transparency International in BiH (TI BIH) has published a case study of the “Grand Trade – Eighteen Years of Theft” which chronologically shows the scale of private state-building and a hijacked state, which enabled this company to seize state land and private property, destruction of public companies and redirection of budget funds to this project, said TI BiH.

He also states that “if the plan of the Indirect Taxation Authority of BiH (ITA BiH) to buy the building of ‘Grand Trade’ in Banja Luka for 98 million KM is realized, it will be a reward for numerous illegal actions that accompanied this project for a full 18 years, and some ended in court rulings.”

Furthermore, the statement says that despite the fact that the owner of the facility was convicted for the embezzlement of the shares of “Medicinska elektronika”, and participated in a number of illegal activities with other actors, and that only the land on which the facilities were built was acquired in a disputed manner was achieved by selling business premises to Telekom Srpske and the RS Lottery, and now the ITA BiH should put an end to the whole process, which again sends a message to the public that crime pays off.

“Considering that the ITA BiH obviously does not intend to give up the purchase of this facility, despite the warnings of the Audit Office of BiH institutions that the tender favors this company because ‘restrictive conditions have been set regarding the location of the facility (distance not more than three kilometers from the city center) and that the offered price is significantly above the approved funds (the price with VAT is 98,571,330 KM, and the approved funds for these purposes amount to 37,900,000 KM’, the question arises how long will the citizens finance the private affairs of the company “Grand Trade” which obviously has the protection of the top authorities,” said TI BiH.

A study published by TI BIH shows that the first scandals surrounding this project began in 2003 with the allocation of city land to this company for use, which was registered as real property, and then extended to private property and Medicinska elektronika land.

The damage to natural persons was compensated by the citizens from the budget, and the former director Ratko Stamenić was convicted for the illegal transfer of the land of Medicinska elektronika. Mile Radišić, the owner of the company “Grand Trade”, was eventually sentenced to three years in prison for embezzlement by the shares of this public company. which was already destroyed by that point in time.

“Despite the fact that numerous illegal actions that accompanied this project were discovered and publicly proven, the institutions did not react, and the authorities do not stop giving tens of millions from the state treasury to the company ‘Grand Trade’, which obviously has the protection of politically powerful people who create and regulate unwritten rules according to which the system of the hijacked state functions. This case has shown countless times that individuals are above the law, and the last in a series of scandals that proves it is the purchase of a building to house the ITA BiH, which will certainly further undermine public confidence in the rule of law system. The case study “Grand Trade – Eighteen years of theft” published by TI BIH shows in detail a number of illegal actions in which numerous actors from the RS government were involved, and which enabled the realization of this whole project to the detriment of public interest and taxpayers,” said the statement of TI BiH.