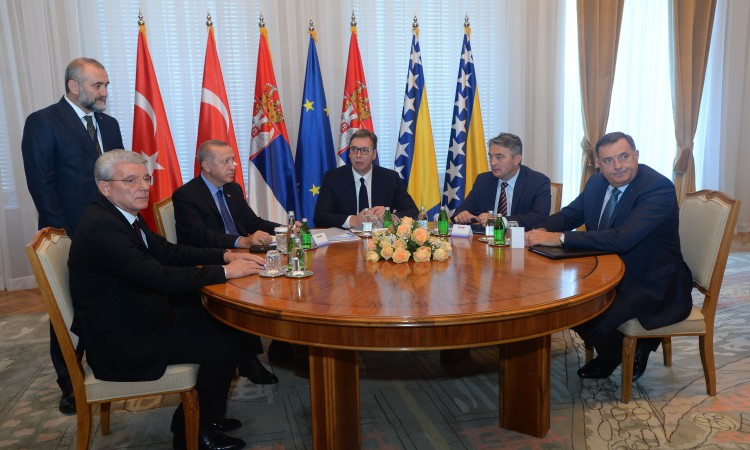 BELGRADE, October 8 (FENA) – Bosnia and Herzegovina, the Republic of Serbia and the Republic of Turkey are committed to stability and peace, it was highlighted today after the meeting of BiH Presidency Chairman and members Željko Komšić, Šefik Džaferović and Milorad Dodik with the presidents of Serbia and Turkey, Aleksandar Vučić and Recep Tayyip Erdogan in Belgrade.

After the meeting, Komšić told the press that it was agreed that Serbia and BiH would address bilateral issues in mutual meetings, noting that besides the construction of the Sarajevo – Belgrade motorway/expressway, future projects such as a new idea for railway infrastructure between countries were discussed.

“These are all very useful projects, although they are expensive, but we have great interest in that,” Komšić emphasized.

Džaferović said Turkey is a stabilizing factor throughout the region and that it has good bilateral relations with both BiH and Serbia, announcing that BiH and Serbia will resolve outstanding issues at the bilateral level.

“That is why the dialogue is needed. Enhanced cooperation between BiH and Serbian institutions is needed because that is the only way to solve problems,” Džaferović said after the trilateral meeting.

He also noted that the Sarajevo – Belgrade motorway/expressway project is affecting peace and stability in the region, adding that BiH has committed to conclude contracts with Serbia and Turkey as soon as possible in order to implement this important project as soon as possible.

The meeting also discussed other important issues in relations between the three countries, as it was confirmed after the meeting by the BiH Presidency member Milorad Dodik, who emphasized that the TurkStream gas pipeline was also among the topics discussed today at the meeting.

“We have indicated readiness for other investments such as modernization of railways and construction of new ones. There is a need to preserve good political cooperation, stability and peace,” Dodik said.

He stressed that BiH has numerous internal problems and that it is not in a position to address effectively certain issues the way Serbia does, which is why BiH is lagging behind in the process of building motorway.

“BiH Council of Ministers should implement cooperation and treaties between Serbia and BiH and Turkey and BiH. This will mark cooperation within the trilateral framework,” Dodik said.

In the context of implementing projects of importance for all three countries, Turkish President Recep Tayyip Erdogan stressed that problems with the government formation in BiH after the general elections held a year ago should be resolved as soon as possible because without government there is no effective work.

“When it comes to traffic and notorways, we are taking steps in this regard and these steps will, I am convinced, bring Serbia and BiH even closer and lead to even more important events in the future,” Erdogan said, reminding that the road is synonym for civilization and life.

He said that if a road is built between two nations it would have an inluence on the population and prevent people from leaving thus making the region a place that attracts people.

The President of the Republic of Serbia, Aleksandar Vucčić, stated that everyone in Serbia and BiH agreed that communication links between the two countries should be built, adding that today is a big day given the beginning of construction of the Sarajevo – Belgrade motorway/expressway.

Vučić emphasized that he is very happy that the route will go through Bijeljina, Brčko and Tuzla, adding that this is a very important project for trade.

“Today, we were drawing railways and roads. We will also discuss how to improve the lives of ordinary people. It is important for us that all these projects bring people together, because when people connect, then they think of a better standard, and not how to fight,” said Vučić.

Meeting participants in Belgrade will lay the foundation stone for the Sarajevo – Belgrade motorway/expressway this afternoon in part of the Sremska Rača border at the border with BiH (Bijeljina) and the village of Kuzmin, which will symbolically mark the beginning of the construction of this important communication project between BiH and Serbia.