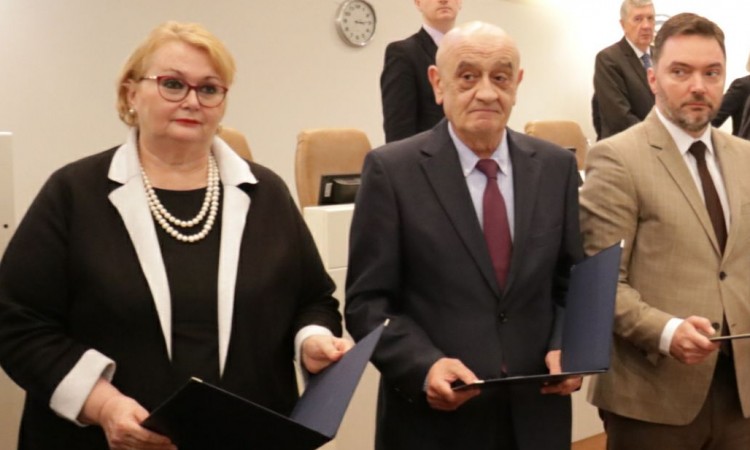 SARAJEVO, December 25 (FENA) – Newly appointed BiH Foreign Minister Bisera Turković spoke in an interview with FENA about priority foreign policy issues, political and economic role of the Ministry of Foreign Affairs (MFA), the migrant crisis and the strategic goal of BiH’s accession into the EU, announcing that the Ministry will play an important political and economic role.

Minister Turković emphasized that the Ministry of Foreign Affairs should play two important roles, one is political which means international cooperation and the other one is economic and is aimed at assisting domestic companies in their international trade and marketing, adding that both functions are of national interest.

“For political role, with full respect for foreign policy principles of constitutionality, sovereignty, territorial integrity and the rule of law, Bosnia and Herzegovina should act in accordance with obligations arising from concluded and accepted agreements and other international instruments, as well as membership in international organizations and associations,” said Minister Turković, who officially took over her duty yesterday from her predecessor, Igor Crnadak.

Explaining the economic role of the MFA as a result of internal reform processes, Minister Turković said that promoting progress achieved through public diplomacy, finding adequate markets for exports from Bosnia and Herzegovina and attracting foreign investment play an important role.

She emphasizes that cooperation with diaspora and cultural presentation of the country should be intensified through networking at cultural and economic levels, by attracting as many highly educated and business people as possible from Bosnia and Herzegovina.

“Protection of interests of BiH citizens abroad and international legal cooperation, as well as promotion of BiH in the world, also play an important role. In order to do this, it is necessary to build capacities and intensify training of diplomatic personnel,” said Minister Turković in response to the question of priorities in the work of the Ministry of Foreign Affairs.

Asked about BiH diplomacy in the context of global strategic processes, she stated that an update of the existing foreign policy guidelines is needed to bring the activities in line with the significant changes in the domestic and external context in the previous period.

“Furthermore, it is necessary to make a comprehensive analysis of quality and consistency of the overall legal framework for foreign policy, in order to make the necessary corrections and additions in accordance with the adopted Strategy. It is interesting that despite the fact that Bosnia and Herzegovina is relatively small country and without large economic indicators, it is very recognizable on the international scene. We are a country with many advantages, from location to multiculturalism. We have an objective chance of being very successful, provided we take up serious work,” stated the Minister of Foreign Affairs.

She stresses that it is necessary to intensify diplomatic activities, as well as visits to EU institutions and actively participate in as many conferences and seminars as possible. It is also necessary to intensify bilateral visits with Member States and to encourage and facilitate the continued operation of the diplomatic and consular network in this direction through serious work and accountability in the field of public diplomacy. It is necessary to increase the visibility of Bosnia and Herzegovina in Brussels and the Member States by promoting positive development in Bosnia and Herzegovina.

In the context of the question that domestic politics also result in the foreign policy of that country, Minister Turković says that we often hear that our internal politics are complicated and fragmented, “alluding to some ideal situation that should give us happiness without hard work and effort “.

“We forget that there are conflicting interests in other countries, that there are those who love and who do not like the distribution of power in the country, that there are political divisions, party divisions, etc. Only serious work, discipline and knowledge can change the state of Bosnia and Herzegovina,” emphasizes Minister Turković.

With regard to NATO, the adopted Foreign Policy Strategy of Bosnia and Herzegovina 2018 to 2023 foresees the continuation of activities in relation to NATO. The migrant crisis has hit not only BiH, but the entire world. We are facing a chain push backs. Slovenian police return refugees and migrants to Croatia. Croatia then returns them across the border, using violence, to BiH. People are trying to get through Bosnia and Herzegovina and somehow get to their destinations, regardless of the oppressive border situation. The situation is not at all easy. We will try to negotiate what is best for us, while helping these people at the same time. It will take a lot of patience and tolerance. I am sure we will find a way out of this crisis,” said newly appointed BiH Foreign Minister Bisera Turković in an interview with FENA.