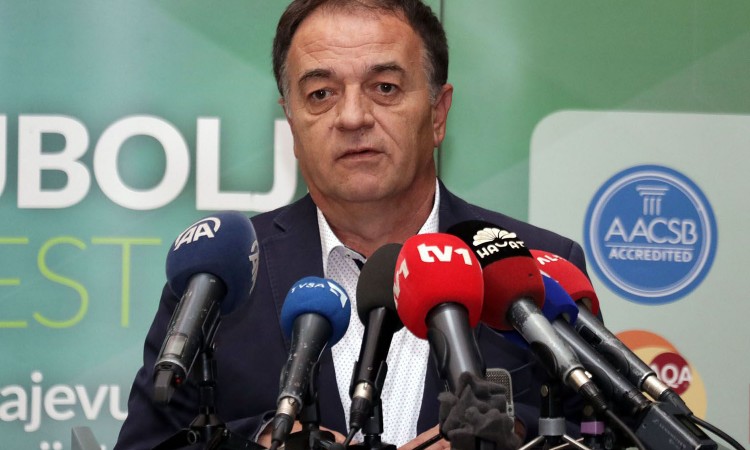 SARAJEVO, February 7 (FENA) – The Council of Ministers of Bosnia and Herzegovina adopted the Revised State Strategy for War Crimes Prosecution in September last year, but we have already had the situation where the deadlines set by it have not been met because a supervisory body has not been formed to monitor the implementation of the Strategy.

The Revised Strategy was adopted alongside Annex B, after the associations bringing together war victims insisted on it. The annex clarifies issues relating to cases against A-list persons, 848 of whom the International Criminal Tribunal for the former Yugoslavia (ICTY) has found that there is sufficient evidence to prosecute them before domestic courts.

This annex to the document also specifies the rules for the processing of war crimes, the conditions of regional cooperation, as well as the methods of work and the composition of the supervisory body.

The process of drafting the Strategy started because the previous one did not bring the desired results, which the associations warned about. The revised strategy has been adopted, but has not yet brought anything significant, the president of the Association of Victims and Witnesses of Genocide, Murat Tahirović, told FENA, stating that certain deadlines from Annex B have not been met.

“Deadlines have expired and we are witnessing various information appearing in public. We sent clear questions to the representatives of the international community in BiH, which also participated in the drafting of Annex B and helped to adopt the Strategy,” Tahirović explained.

He emphasized that the associations also turned to the Residual Mechanism in The Hague because they believe that domestic institutions again do not respect the deadlines imposed by the state strategy and that without the strong support of the international community the revised strategy would just remain a dead letter.

“We will see if the blockades would be removed quickly, and if they are not, we will ask for a reaction from the European Union and measures against those who did not meet the deadlines until the budget adoption has been blocked in terms of IPA project funds,” warned Tahirović.

The cases forwarded by the Hague Tribunal to BiH under the Road Map contain A-category cases where there is sufficient evidence under international legal standards for a person to be held liable for serious violations of international humanitarian law.

“Now we have finally managed to make these cases a priority in the work of all prosecutors’ offices. The Prosecutor’s Office of BiH had the task, pursuant to Annex B of the Revised Strategy, to gather all information and prepare a complete strategy for working on these cases. The Prosecution of Bosnia and Herzegovina has announced that it has completed its part of the work. Those who carry the highest levels of responsibility are also on those lists, according to available information, and the persons responsible for the crimes committed during the siege of Sarajevo, and we know that there has been no indictment for the siege of Sarajevo since the signing of the Dayton Peace Agreement,” Tahirović underlined.

Through Annex B of the Strategy, the associations sought special answers to the questions about the more than 800 A-category cases sent to BiH by the Hague Tribunal. They asked for answers as to how many have been processed so far, how many have been suspended and how many are locked up and filed somewhere by the prosecutors, which is why they insisted that A-cases be singled out as an absolute priority in the work of all prosecutor’s offices.

“There is a delay in the realization and we are dissatisfied. The revised Strategy is BiH’s national strategy for prosecuting war criminals. No one has the right to obstruct and block the Strategy. The earlier strategy failed and no one was held accountable. It seems that the Revised Strategy is experiencing obstructions all over again,” Tahirović believes.

When it comes to the appointment of the supervisory body, the associations managed to ensure that in addition to the representatives of the European Union and the OSCE, the Prosecutor’s Office of the Residual Mechanism is involved in monitoring the implementation of the Strategy, but as we see, we have delays, right in the first steps in setting up the supervisory body.

There is a coordination of several associations of war victims who jointly act in relation to the Revised Strategy, to which they had numerous objections, but the expert teams for the preparation of the Strategy, he added, never asked the victims what they thought about it, and it seems that the best have not been not chosen for the expert teams as the victims of the war had to react.

“Representatives of the Serb and Croat people in government institutions at the entity and state level unanimously supported the Revised Strategy in its original form and only Bosniaks responded by demanding a change in parts of the Strategy, and with the help of the international community, Annex B was adopted.

For now, he says, they have not informed the international community about everything, although they have done so before because they had, he notes, bad experiences with BiH Minister of Justice Josip Grubeša, who in the process of adopting the Revised Strategy marked all their remarks and demands as exclusively ‘ethic’ and Bosniak and even domestic institutions accused them that the demands were politically and ethnically colored.

However, Tahirović especially emphasizes that everything they do is in the direction of respecting the resolutions of the United Nations Security Council concerning the prosecution of war criminals in BiH and the region, international agreements and treaties, and that the legacy of the Hague Tribunal, the BiH laws and the results of Rome Agreement and the Road Map of the Treaty of Rome.

That is why it is important to immediately involve the international community, he notes, and e know quite well that the victims have been ignored by the state institutions for years regarding the state strategy for prosecuting war criminals and have been denied information. The support of the international community of the Hague Residual Mechanism is the best proof of that claim.

The first War Crimes Prosecution Strategy from 2008 did not deal with ICTY cases at all, but considered virtually all cases (there were 16,152 reported persons at the time), which created confusion and practically returned BiH to the situation of 1996.

The associations that bring together war victims and survivors warned back then that it would not work, which unfortunately came true because the creators of the strategy from 2008 admitted that the strategy failed, and in 2016 they started drafting a revised strategy for processing war crimes.