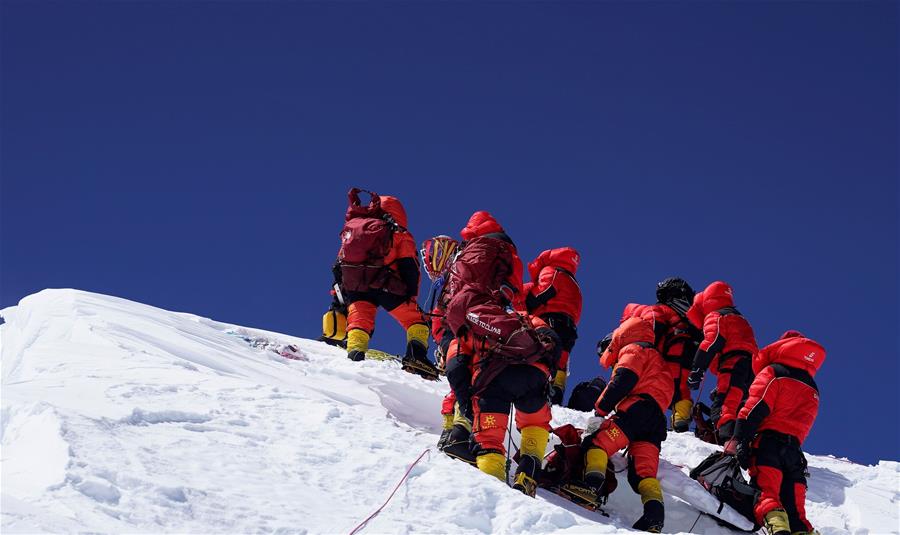 MOUNT QOMOLANGMA BASE CAMP, May 27 (FENA/Xinhua) – A Chinese surveying team reached the summit of Mount Qomolangma on Wednesday morning to conduct a series of surveys on the pinnacle of the planet.

Qomolangma is the peak’s Tibetan name, which has existed for centuries among locals and preceded “Mount Everest,” a name created to remember a British surveyor general of India and still widely used in the West.

According to Lin Chao, a late prestigious expert on geographic history and topography, the Manchurian and Han Chinese name for Qomolangma first appeared in “Huang Yu Quan Lan Tu,” or “Atlas of the Whole Imperial Territory,” following a mission sent by the Qing Dynasty (1644-1911) government to survey and map Tibet around 1715.

The map, despite showing an accurate relative position of the mountain and its glaciers, did not publish its height, though historians said surveyors had brought measurement equipment such as a four-vernier, semi-circular protractor.

After the founding of the People’s Republic of China in 1949, the central Chinese government called for an accurate measurement of the height of Mount Qomolangma and the drawing of a topographic map.

In 1975, Chinese surveyors measured Mount Qomolangma as standing 8,848.13 meters above sea level. The released height was recognized by the international community.

In this survey, the Chinese team, for the first time in human history, erected a survey marker atop Mount Qomolangma, allowing six survey points at the foot of the mountain to simultaneously measure the height of the peak.

In 2005, China remeasured the elevation of Mount Qomolangma, combining traditional geodetic methods and satellite technologies. The task adjusted the height after measuring the depth of the snow cap atop the summit.

The 2005 survey registered the summit’s rock height at 8,844.43 meters and its ice-snow layer at 3.5 meters deep. There was 1 meter of unknown material, probably a mixture of ice and gravel, between the rock head and the snow cap.

A Chinese surveying team reached the summit of Mount Qomolangma on Wednesday morning to conduct a series of surveys on the pinnacle of the planet. After summiting, team members began erecting a survey marker on the snow-covered peak, which measures less than 20 square meters.