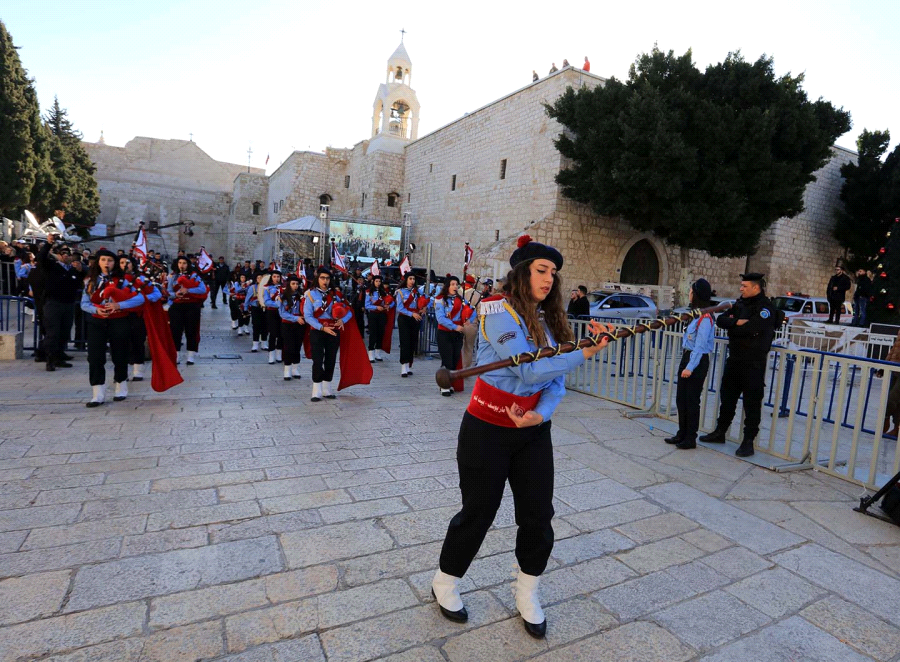 BETHLEHEM, January 7 ( FENA/WAFA) – Heads of the orthodox churches in Jerusalem arrived on Monday (6 January) in Bethlehem ahead of the midnight Christmas mass and ushering in the Christmas celebrations for the Orthodox churches running according to the old Julian Calendar.

The first to arrive at Bethlehem’s Manger Square was the top Assyrian clergy, followed by Greek Orthodox Patriarch Theophilos III and later by the Coptic and Ethiopian heads of churches.

Theophilos headed the annual procession from the Greek Orthodox Patriarchate in Jerusalem’s Old City to Manger Square, making a stop at Mar Elias Monastery before passing through a massive metal gate in the towering Israeli concrete wall that separates Bethlehem from Jerusalem.

Local faithful and pilgrims gathered at the square outside the Church of the Nativity, where a 15-meter Christmas tree had been erected, and along the narrow cobble-stoned route, known as Star Street.

The crowd were entertained as bagpipe-playing Palestinian scout groups paraded past the giant Christmas tree and Christmas carols in Arabic were played through loudspeakers.

The heads of churches were separately welcomed at Manger Square by clergy, dignitaries and a host of Palestinian officials ahead of the midnight mass at the Church of the Nativity, built over the grotto where Christian tradition says Jesus Christ was born.

Hotels dotting the biblical hometown of Jesus are almost fully-booked as Bethlehem enjoys its busiest Christmas season in years. Recent statistics published by the Ministry of Tourism and Antiquities indicate that the number of tourists to the occupied territories increased by 15 percent in 2019.

“The number of tourists who have visited Palestine since the beginning of this year has exceeded 3,520,000, with an increase of 15.4 percent compared with 2018,” said the Minister of Tourism and Antiquities Rula Maayah.

This year, less numbers of Palestinian Christians, whose numbers have dwindled in recent years, flocked to the biblical city. Many are choosing to leave their homeland to escape more than 50 years of Israeli occupation.

Living under military occupation, Palestinian Christians have been suffering as a result of Israel’s policies of land seizures, settlement construction, movement restrictions and, for those living in Jerusalem, the revocation of residency identity cards.

The Church of the Nativity is administered by three churches, the Roman Catholic Church, the Greek Orthodox Church and the Armenian Church.

The Catholic and western churches celebrated the feast on December 25, 2019 according to the Gregorian Calendar.

The Greek Orthodox Patriarch of Jerusalem is the main custodian of the Christian holy sites in Jerusalem and throughout Palestine and Jordan. It embraces several scores of thousands of Arabs in Israel, the occupied Palestinian territories and Jordan. The patriarch and bishops, however, are all Greek and drawn from the Brotherhood of the Holy Sepulcher.

The church owns many buildings and properties throughout Jerusalem, the occupied territories, Israel and Jordan, including properties that were fraudulently taken over by Israeli settler-colonial groups.

Palestinian Christians account for less than 1 percent in the occupied Palestinian territories, with the Greek Orthodox accounting for 51 percent of the Christian community.