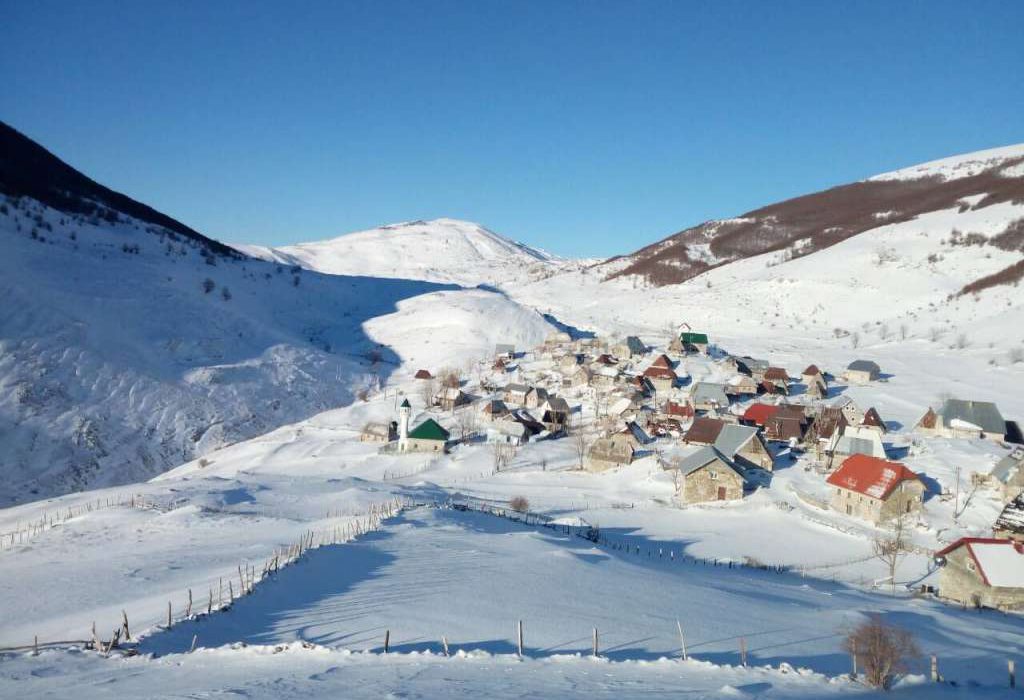 SARAJEVO, February 19 (FENA) – In the only village in Bosnia and Herzegovina that is over 1,300 meters above sea level, Lukomir, on the southwestern slopes of Bjelašnica Mountain, there is unreal snowy silence. All 20 houses are locked during the winter and the village is cut off from the world for months.

“You can only reach the village through the snow on foot,” says Mujo Masleša, who visited his own house and the neighbors’ houses in Lukomir a few days ago.

Before the first snow, residents leave their homes and move to settlements near the capital Sarajevo. As soon as the first days of spring begin, they make their way back up the mountain with their flocks of sheep and return to Lukomir.

“Our return depends on the weather conditions, if spring arrives early, then we will go to Lukomir earlier. You never know, last year we returned to our houses in May, and the spring before we were already in our houses in Lukomir in March,” said Masleša in an interview for FENA.

The snowy silence will be replaced by the liveliness that the locals bring to the mountain as they unlock their houses and start agricultural work in their gardens and fields.

Lukomir is 50 kilometers away from Sarajevo. This Bjelašnica village has been declared a national monument with 96 residential and agricultural buildings, a former school building, and two stećak necropolises.

The cliffs of the canyon of the Rakitnica River are a special feature of Lukomir. A morphological phenomenon and unreal beautiful wonder of wild nature with a series of rapids, waterfalls and peaceful pools of the Rakitnica Canyon at 20 kilometers in length is the longest, and at 800 to 1,000 meters in depth, the deepest canyon in Bosnia and Herzegovina. The beginning of the canyon is at 1,120 meters above sea level. Some waterfalls are 300 meters high. As such, the Rakitnica Canyon is one of the deepest in Europe and home to 30 endemic plant species.

It is a favorite destination for nature lovers, motorcyclists and cyclists, as well as tourists who enjoy the view of the Rakitnica Canyon from Lukomir which reaches all the way to the ‘Mostar Gate’ and the peaks of the Mount Prenj, known as the ‘Bosnian Himalayas’. The descent from Lukomir starts at 1,495 meters above sea level and dives into the vast meadows around Studeni Potok, a special natural stream that makes unreal meanders and bends, covered with mint and St. John’s wort, where flocks of sheep graze on seemingly suspended green islands. It provides a uniquely tame landscape that is ‘relaxing’ after the cliffside paths of the Rakitnica Canyon.

Lukomir, whose name is derived from the words ‘harbor’ and ‘peace’, is described in folk tradition as a place of safe, peaceful living and whose inhabitants lived in their homes all 12 months of the year for centuries. Despite several meters of snow in Lukomir, as well as in other mountain villages, life was prepared for winter with food reserves and other necessities during the months long snow blockade of the village. For the last 11 years, locals have moved twice during the winter. At the beginning of winter when they leave the village and in spring when they return to their homes. Modern times, limited financial opportunities, and mostly elderly people whose children are employed in the city, have greatly suppressed the centuries-old tradition of supplying groceries for several months and staying in the village.

The return in spring is especially important for the locals who have sheep and cows and who want to return to Lukomir as soon as possible due to grazing and sowing. In summer, there are about 3,000 sheep in the pens that graze in the mountains. Sheep’s milk and cow’s milk produce dairy products of high quality due to the ecologically healthy nutrition of livestock.

The couple Mujo and Mina Masleša, both born in Lukomir, built a new stone house in the authentic Lukomir style a few years ago on the foundations of a former barn. In the eco-household, in addition to food and drinks, guests are offered accommodation and rest in the mountain environment.

They explain that such a construction of the house was possible because barns used to be the size of a house due to the number of cattle. Lukomir houses are made of stone with a vertical roof made of cherry wood. This harmony with nature lasted for centuries as nature and people were respected equally, casual travelers were welcomed wholeheartedly, and natural disasters and seasonal changes were accepted as God-given.

In recent years, until the appearance of the pandemic, Lukomir was attractive to foreign tourists and alpinists who came to Sarajevo and then visited this picturesque Bosnian village.

Staying in the mountains, taking in the fresh air, and hiking to ‘escape’ the city’s everyday life is the best recipe for physical and mental relaxation, and has become especially popular among BiH residents during the lockdown period. During the pandemic, Lukomir remained far from the ‘world’ and coronavirus. The oldest inhabitants of Bosnian villages are convinced that health and immunity can be found in the mountains.

The last authentic village in Bosnia and Herzegovina has another peculiarity – it is the only inhabited village at an altitude of 1,300 meters above sea level. It resists the changes of seasons and harsh winters while embracing the pleasant summer temperatures with fresh air endowed by nature. It is as if time had stopped in one of the past centuries to now welcoming mountaineers, hikers, and tourists. Rock climbers also enjoy scaling the mountain peaks above Lukomir – Lovnica at 1,856 meters above sea level and Obalj at 1,896 meters above sea level.

The hiking trail to Lukomir, which walks parallel to the Rakitnica Canyon has extraordinary viewpoints and is full of ‘traffic’ during the summer. Hiking towards Lukomir last summer, I met mountaineers from various countries and enjoyed brief chats with Germans, Austrians, Slovenians, Czechs, and tourists from Arab countries who expressed their enthusiasm for the beauty of BiH mountains and nature.

In recent years, the community of bloggers, popular among the younger population, has become increasingly interested in Sarajevo and in Bosnia and Herzegovina. Andrew Mazibrada wrote in his blog “In the Olympic Mountains – the Bjelašnica Massif in Bosnia and Herzegovina” about “Lunch in Lukomir, the Highest and Most Isolated Mountain Village in BiH” among “Six Things You Shouldn’t (But Might) Miss in Sarajevo, BiH”.