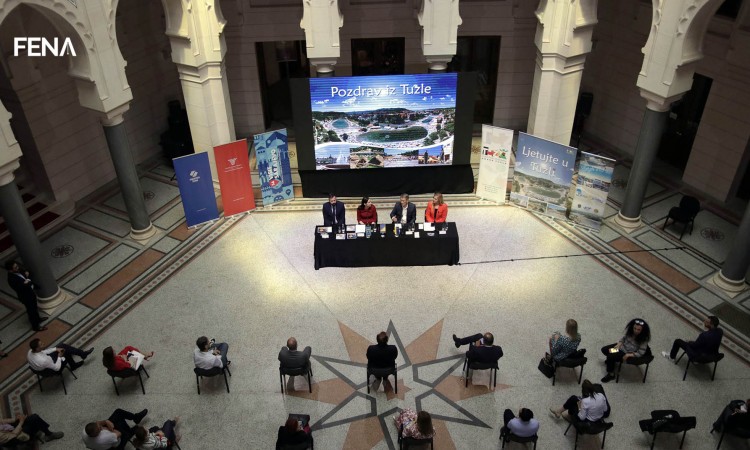 SARAJEVO, June 17 (FENA) – The Tourism Board of the Sarajevo Canton in cooperation with the City of Sarajevo hosted today an event under the motto “Summer in Tuzla” where the tourist and cultural offer of the City of Tuzla was presented at the City Hall.

Director of the Tourist Office of the Tourism Board of the City of Tuzla Amra Jaganjac said that this is an opportunity to present the unique salt Pannonian lakes located in the ‘heart’ of Tuzla, and to open an exhibition dedicated to famous Tuzla painters, primarily Ismet Mujezinović, Adela Ber, the first educated painter in BiH and women’s rights advocate, but also Djordje Mihajlović and Haim Pinto. The exhibition also includes an exhibit dedicated to Tuzla writers Meša Selimović and Derviš Sušić, as well as an exhibit dedicated to traditional literary meetings in Tuzla.

The swimming season in Tuzla, as she added, officially started on June 1, and everyone can enjoy unique salt lakes that cover an area of more than 20,000 square meters of water. There are three lakes with salt waterfalls which provide a great pleasure and atmosphere for swimming in a safe locality since the beaches of the salty Pannonian lakes comply with the standards of the blue flag, and also all epidemiological measures are strictly observed.

Chairman of the Commission of the Tourism Board of the Sarajevo Canton Kenan Magoda said that this is an opportunity for Tuzla to show all its beauties when it comes to its tourist and cultural offer.

“I am proud of the fact that BiH has a lot to show and only together can we overcome the consequences of the pandemic and the problems facing the tourism sector in BiH,” said Magoda.

Mayor of Sarajevo, Benjamina Karić, said that today they are sending a message from the City Hall of unity, togetherness and cooperation of the capital of BiH, Sarajevo, with Tuzla and all other cities in BiH.

“We want to keep tourists, give an opportunity to tourism, especially cultural tourism, show Europe, the world, but also the local population what natural beauties we have,” said Karić.

Mayor of Tuzla, Jasmin Imamović, said that the synergy between Sarajevo and Tuzla is very important, as well as the infrastructural connection of those cities. He stated that Tuzla also has a special geological past and is proud of its Pannonian lakes.